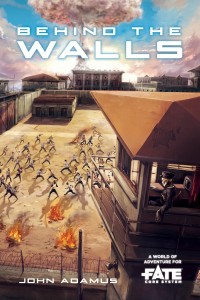 Just to be clear…. This is supposed to be a prison game. Your characters are hardened convicts surviving in a self-contained and self-sustaining environment that happens to have been ideally placed to survive a 1951 nuclear apocalypse. But great pains have been taken to remove or de-emphasize those story elements that characterize not only stories about prisons, but the way prisons function in real life. To be specific, this setting does its level best to ignore or downplay: gang violence, prison rape, segregation, and racism (p. 2). These are the prime motivators of tension in this kind of setting, instead the text encourages themes exploring claustrophobia (p. 5) along with “institutionalism, culture, and aggression” (p. 23).

So what’s left? The text encourages characters to introduce tension in the form of gender identity and orientation, while in the same text block they state a desire to avoid the issues of sexual assault and homophobia (p. 2). I’m not sure how to do that. Tension in the setting is meant to primarily originate between players, and there is a system introduced for managing a set of secrets that players are to keep from each other. There is further tension between the primary gangs of the prison, though we are reminded that proper development of this tension isn’t supposed to be predominantly violent, but it is supposed to be aggressive. Again, I’m not sure how that works. There is also some tension between the guards and the inmates (your players are all inmates) that is meant to thematically reflect two political superpowers.

Observation 1 – the system for keeping and revealing secrets depends heavily on the players introducing tension within the party. That formula isn’t going to work for every gaming group; it certainly won’t work in my gaming group. Even without that requirement, the system is mechanically weak and relies more on improvisational storytelling than it does on game theory. Observation 2 – though stating a desire to remove certain tropes of the genre mentioned above (p. 2), the trope of guard corruption has been retained. NPC guards are exclusively described as “routine” (read “apathetic”), “hostile”, or “lazy” (p. 16-17). The warden is described as “tired” with aspects that depict callousness and greed (p. 35).

Verdict? This is a setting for a very specific group of gamers. I am not one of them; I have a few issues with the setting. The guards and the law enforcement structure are depicted as corrupt, brutal, and ineffective in contrast with a prison society that is trying to keep order. This inversion of both reality and storytelling convention offends me a great deal, but I’m willing to chalk that up to my personal experience as a former law enforcement professional (specifically, a prison guard). If I wanted to explore prison themes in a game at all, the mega-cities of Judge Dredd do an excellent job of developing those kinds of stories while still providing a broad scope of action.

My main criticism is that there is no tactical game here. This setting is all about interpersonal drama, and I have no interest in exploring the themes of gender identity, aggression without violence, or prison culture; these themes are also explored in artwork that is both suggestive (p. 36) and explicit (p. 20). The mechanical material is under-developed; I can’t even lift the mechanics of the setting out and use them in a different prison-themed game. Only gamers with a specific interest in the thematic material and who emphasize storytelling over game play will benefit from this book.