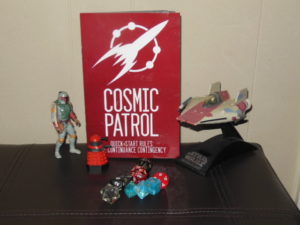 Cosmic Patrol from Catalyst Game Labs appealed to me the instant I saw the book. Such classic iconography with the rocket ship surrounded by orbiting bodies. A name so evocative of the pulp stories and radio serials that I love. Elegant graphic design in an attractive digest-sized hardcover. Wait. Digest size? I suppose that’s when I knew that something was about to go terribly wrong. After all, RPG books are supposed to be the full size of a 8.5×11 sheet of paper. It’s only reluctantly that Savage Worlds and Fate won me over to the 6×9 novel-sized format. Certainly Palladium’s decision to publish the new edition of Robotech: the Shadow Chronicles in manga-sized trade made the book completely undesirable from my point of view.

I was rushed, so I passed by the core book and grabbed the Quick-Start rules instead. Let’s take a look.

Create Your Character: (D10) The hardcover books are certainly very attractive leatherette numbers with nice quality paper stock inside. The graphic design is simple, though I don’t have a large sample size. It is formatted for easy reading and graphical elements are laid out intuitively. The iconography and language is very evocative of the genre. 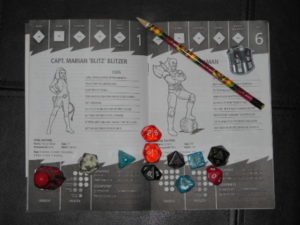 Formulate Cues: (D8) It’s very clear from the outset that this is a story-based game rather than a number-cruncher. As such, the characters have very little definition in the form of game stats. They do get plenty of definition in the form of Cues, short phrases that define your character’s goals and motivations. These Cues are used to direct the action during the game. The minimal stat blocks are rated in values from D4 to D10 and are used in a combined dice roll. The whole system is very similar to the Cortex system from Margaret Weis Productions. It’s mathematically simplistic, and serves mainly to push the action in the direction of the Cues, Plot Points, and Narration.

Begin Narration: (D4) “Cosmic Patrol” does not require a gamemaster for play – instead the responsibilities of the Lead Narrator (LN) rotate from player to player throughout the game.” (From the rule book.) Immediate deduction for sloppy terminology; the grammatically correct word is “Game Master”. I’m not a fan of story stick games, but I’m not holding it against this one. Unfortunately, the turn structure is ambiguous, actions are resolved against a purely random die roll, and no effort is made to manage the Plot Point economy. As far as game mechanics go, this one lacks cohesive structure and would benefit from chucking it all in favor of pure narration.

Earn Plot Points: (D4) This is really where I think the whole thing falls apart. Every action in the game requires the expenditure of Plot Points, which are handed out to players within the game by other players and by the Lead Narrator. Each Lead Narrator takes a “scene” to perform their narration, but this hardly matters since story narration may be performed by any player in any scene. The whole idea is predicated on the “Yes, and…” methodology popular in improvisational acting. The experience is heavily dependent on the presence of a script and the willingness of players to act in concert with that script, despite rulebook claims to the contrary. There is so little in the way of mechanical structure or background elements that players are literally making everything up as they go along.

Achieve Story Objectives: FAILED. This game is going to go off the rails pretty quickly. There are literally no limits to what characters can do and no framework within which they must act. It’s not a game at all but a storytelling activity. As far as that goes, the stories are really pretty cool and the books are worth reading as improvisational scripts. This would make a neat exercise for amateur actors and acting students. Possibly it is ideally set up for LARPing, as the narrative sequence depends on the Plot Point economy. With the right group of people, this could be a blast; with the wrong one, it’s going to be an unmitigated disaster.