I’m afraid my association with Doctor Who is not as extensive or storied as it could be. I watched Tom Baker and Elizabeth Sladen on PBS with the rest of my generation but I was always more interested in Star Wars and Star Trek, Buck Rogers and Battlestar Galactica. Still, Tom Baker is who I think of as the Doctor and the Fourth Doctor is my Doctor. I have friends who are massive Doctor Who fans and I distinctly remember when Paul McGann’s Doctor movie first premiered that we all threw a party for the advent of the Eighth Doctor.

One day, my daughter excitedly grabbed my arm and said, “Dad, you’ve got to see this show!” She turned on BBC America and there was David Tennant and Billie Piper saving the world. She explained patiently, “This is a rerun. He’s the Doctor but he regenerates into new actors. Peter Capaldi will be the Doctor soon!” I smiled, secure in the knowledge that I had done at least one thing right in her upbringing. Fueled by my daughter’s excitement, the current generation of Doctor Who stories became scheduled family time and required viewing. 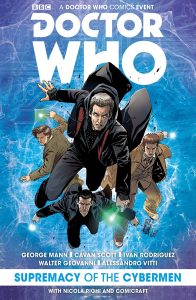 When I decided it was once again time to venture into the world of comics, it was my wife who thrust the first issue of Supremacy of the Cybermen into my hands, saying, “I want to read this one.” Be still, my fluttering heart.

Titan Comics held the current license to the Doctor Who properties and they were taking full advantage of it. They premiered ongoing titles for Doctors Nine, Ten, Eleven, and Twelve. They put out special multi-Doctor crossover events. They delivered limited series with the classic Doctors. It was all a bit overwhelming. I picked a few titles to follow and stuck with the Tenth Doctor, the classic Doctors, and the crossover events. They’ve all been pretty good.

Doctor Who stories are sci-fi adventure and mystery stories. They have a certain pacing and sense of discovery to them that provides the “Doctor Who” feel. For the Doctor, it’s not about big, dramatic set pieces or explosive action sequences, it’s always been about choices and the morality of making choices. The Doctor himself is far from perfect and though he’s admittedly making things up as he goes along, he does look good doing it. Most other modern sci-fi stories focus on pushing the bounds of the possible against the inconceivable; the Doctor strives to take the inconceivable and place it solidly within our current frame or reference. Thus, dramatic tension derives from what the protagonist ought to do rather than what he is able to do.

So the real question regarding the comics is: does it feel like Doctor Who? Like the television show, a variety of creators contribute to the final story. In this case, every Doctor’s book has a different creative team. It falls to editor Andrew James to ensure the different titles maintain consistency with each other as well as the source material. I think he did a pretty good job.

The Tenth Doctor routinely wanders into the middle of a mystery, trying to decipher the reasons behind a dangerous situation before it spirals out of control. He’s a bit of a loner who still manages to find someone with whom he can connect. He dives headfirst into danger fully conscious that he’s the only one who can adequately deal with the situation. His solutions are direct, his responses compassionate. Adventure and discovery are still out there; this Doctor struggles to look at the world with new eyes. Set between the departure of Donna Noble and the Tenth Doctor’s final conflict with the Master, he takes on new companions for his adventures, capable individuals who want to discover the universe. This Doctor is a fighter and a protector who knows better than to retreat into isolation.

The Eleventh Doctor is more of a mentor than ever before. He also has new companions, people who are lost and need guidance. The Doctor is whimsical and subtle, coming at things from the side and turning every adventure into a teachable moment. The Twelfth Doctor travels alone. He is irascible and grumpy, taking on adventures because they are thrust upon him. This Doctor seems to be at the end of his patience with meddlers of all kinds, whether their intentions are good or ill. Both the Eleventh and Twelfth Doctors have ongoing titles, but I’ve only read their multi-doctor and anthology adventures.

The Third and Fourth Doctors received limited series, each one featuring a prominent companion. The Third Doctor remains a man of action who charges into situations alongside his companions. The Fourth Doctor is still all flashing teeth and flying scarf, secure in the knowledge that everything is going to work out as it should. Their stories carry the unmistakable aura of the late 60s and early 70s, complete with period-accurate dialog and the pseudo-surrealism that dominated the art and visual effects of the time. I found both stories to be eerily reminiscent of the show, as if they could have been adapted from the aired episodes.

I thought they captured the spirit and flavor of Doctor Who very well. The stories are grounded in optimism and the confidence that we can be better people and make the world a better place if we only so choose to do and be. It’s one of the things that keeps me coming back to the Doctor as a compelling hero. Of course, the Doctor is also predominantly – even defiantly – humanistic and materialistic. So many of the stories deal with creatures on other planes of reality or with other modes of existence that it’s easy to forget the underlying ethos that all of these things are part of the natural order of the world, that those things we describe as spiritual are simply things we do not yet understand. It’s a rational and compelling sola natura argument, made extremely attractive by the character of the Doctor and the show’s emphasis on compassion and the preservation of life.

Curiously, the Doctor himself provides the best rebuttal of his own argument. He firmly believes in the existence of morality and is able to frame his moral code in absolute terms; some things are always good and some are always evil. While codes of acceptable behavior vary from culture to culture, the definitions of good and evil do not change. The Doctor expects everyone with whom he deals to understand these values innately, not within their cultural frame of reference but as a function of being a thinking, living individual. By contrast, the villains of Doctor Who are largely mechanical or pseudo-living, the tools of another power. Their capacity for individualism either never existed or has been forcibly taken from them. Villainy in the series is always destructive to others and is always by choice.

So how is it that the Doctor expects every living being across the galaxy, in every time and dimension, to share a common definition of good and evil? Where does this come from? Doctor Who’s sola natura premise defines as fallacious any logical construction that includes absolute morality. The question never arises within the series, leaving the viewer or reader to seek out the answers for themselves. This is a good thing if you are inclined to explore the concepts of the show. If you are willing to simply take things at face value, the underlying philosophy of the series provides all necessary truth pro forma, leaving no need to explore scripture and offering no validity to any religion’s claims to absolute truth.

I’ve enjoyed Titan Comics Doctor Who stories a great deal, but I don’t have any of them in my pull-and-hold file anymore, and the fault lies with Titan’s publishing philosophy. Many of the books are printed with multiple covers, each following a different theme and making it very difficult to collect a story where all the covers match. Their printing schedule has been subject to unexpected delays, sometimes resulting in books more than two months apart in the same story arc. I don’t mind waiting to read complete stories, and Titan consistently collects their titles into high quality hardcovers and trade paperbacks. Instead of buying twelves books in a title every year, I only need to buy two and I can find them at the Barnes & Noble around the corner.

If you like Doctor Who, the Titan books are a great place to find your favorite Doctor. If you like good sci-fi adventure, the comic book versions of the Doctor will scratch that itch for you. If you’re curious about the Doctor but intimidated by the sheer quantity of the character’s history, the comics provide a convenient starting place that’s expressly intended to make new readers comfortable. I give Titan’s Doctor Who books a Quality score of “Excellent” and a Relevance score of “Subtle, but High”.

Winston Crutchfield has loved comics ever since he discovered his older brother’s stash of Spider-Man and What If? books forgotten in a dresser drawer. He blames his mother for teaching him to read and his grandmother for fooling nobody by “accidentally” picking up new comics at the drugstore with her crossword puzzles. He is the publisher and small business service provider at Critical Press Media, and may be found in the Christian Geek Central forums as “MindSpike”.