Summer of 2014 saw the release of the fifth edition of Dungeons & Dragons in a box set designed to introduce new players to the game. The box includes a rule book, an adventure book, pregenerated character sheets, and a full set of dice. It retails for $19.99.

Create Your Character +0: The production quality of the box is fairly average. The dice are a nice, marbleized deep blue with bright white numbers. The rule books use thick, glossy presentation pages, and the character sheets are on heavy-weave linen. Both books are coverless, saddle-stitched jobs. A 64-page rulebook and a 32-page adventure book. The included rules are meant to take characters as high as 5th level, and the adventure booklet maps out this structure very well. The box set plays as a quaint little self-contained game that will provide four or five complete gaming sessions.

Roll for Initiative +3: Much of the violence and occult material has been removed from this starter set. Some mention is made of necromancy in the adventure material, and there is an encounter with a banshee. Magic is described as essential to the flavor of the Dungeons & Dragons experience, but the magic contained in the box emphasizes evocation, abjuration, and illusion – a power set that intentionally resembles super powers. There is a nice variety of monsters to beat up, but the nastier or more horrific critters don’t show up. 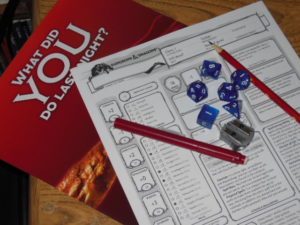 Attribute Modifiers +3: The new 5e rules scarcely resemble the 4e set at all; it feels much closer to the previous 3.5e rules. Character abilities have been trimmed significantly. Character level now provides a single proficiency bonus which applies equally to skills in which a character has proficiency, and that bonus caps at +6 for a 20th level character. Weapon usage is now a skill like any other; there is not a separate Base Attack Bonus. Characters receive attribute pumps and class features as they level but not Feats. Characters can now gain “advantage” or “disadvantage” as a situational bonus, taking the better of two twenty-sided rolls. Character creation includes occupation and background elements that help determine skill proficiency and provide “Inspiration” for characters to use during the game. All in all, the range of mechanical variation has been drastically reduced, allowing radically different characters to maintain parity of effectiveness and significantly reducing the amount of math involved.

Saving Throws -2: I would have rather had a single, 96-page perfect bound book instead of two stapled magazines. A box set should have maps, and they missed an opportunity to include either maps of Phandelver Mine (useful) or a map of Faerun (sweet). I don’t even have to have the sweet, poster-sized treasures of yesteryear, full-page printouts would have been nice to have. It compares quite naturally to Pathfinder, but comes up short for a resolution system that feels dryly uniform. 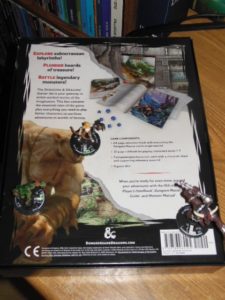 Armor Class +0: The dice are really nice, and this box is entirely self-contained. It’s a great introduction to role-playing games in general and Dungeons & Dragons specifically. The art direction is beautifully painted and epic in feel. The adventure touches all the elements of the genre, and is superbly constructed both for playing and to use as a model for your own scenarios. It compares quite naturally to Pathfinder, and the reduction of value ranges in the math means a pleasantly smaller standard deviation in execution.

Roll to Hit: This is a great gift item for a new role-player or a board-gamer who wants to try something different. Experienced gamers won’t miss anything by leaving this on the shelf, and may be better served to just spend the extra money on the hardcover. On the other hand, the price point is low and it will definitely scratch that fantasy itch. Modified 14 on 1d20.