I don’t remember exactly how I stumbled onto Humble Bundle; it probably came up in one of the forums or newsgroups I read. However it happened, I arrived just in time to purchase their Dungeons & Dragons digital comic book bundle. The bundle included the complete runs of the Advanced Dungeons & Dragons and Forgotten Realms books that DC Comics published in the 80s and 90s. It hadn’t really been on my radar at the time; I was mostly into superhero books. At the moment, though, I was craving good fantasy adventure and wanted something to go along with our current D&D campaign. Good value, good cause, great buy. 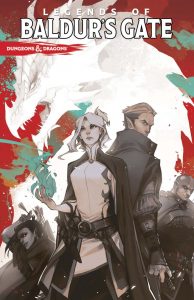 Better than I knew; the bundle also included the more recent books published by IDW. When I flipped open the first pages of Legends of Baldur’s Gate I discovered hidden treasure. It was there that I met a desperate elven sorcerer named Delina, on the run from the minions of the Cult of the Dragon and unable to wield her wild magic effectively. Her flight leads her to Baldur’s Gate and the statue of Minsc, the Beloved Ranger who generations before was one of the original heroes of Baldur’s Gate. Delina’s wild magic brings him to life and the fight is on!

Minsc’s first words struck a chord deep within me, ringing a note I hadn’t realized I’d been desperately missing. “Stand down, dirty minions of evil, or face my hamster’s wrath!” Here stood a hero.

I’d pretty much given up on comic books entirely five or six years before. The current generation of creators simply wasn’t telling stories I wanted to read. My present comics consumption consisted of a scant handful of web comics that I read whenever I remembered to catch up. Suddenly I remembered how much I loved this art form and how much I missed it. I have more than two decade’s worth of back issues in a wide variety of titles, but there is joy in the discovery of new material entirely separate from the nostalgia of rereading favorite stories. I now had a new hero. 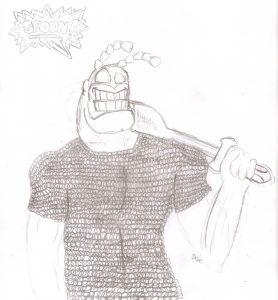 The more I read, the more familiar he seemed until a soft light finally dawned. It was as if Ben Edlund had come to his senses and fled the insanity of Hollywood to return to his roots. If The Tick wore chain mail and fought evil with a broadsword, this is what it would look like. The rest of the book remained rooted in the serious pseudo-realism of dramatic fantasy, without the trappings of the absurd that made The Tick’s entire world surreal. Minsc, however, perfectly echoed that hero’s oblivious optimism and charisma. He was that one guy at the gaming table, the one who just shows up to have fun and smite evil while the rest of the party deals with their intrigues and personal drama. I flipped to the credits page, fully expecting to see Edlund’s name as the headline.

Jim Zub? Never heard of him. Let’s see … Skullkickers – heard of that but never read it. Pathfinder comics – saw them in the store but never bothered. Samurai Jack – how on Earth did I miss a Samurai Jack comic? Figment – my daughter loves that book. This could be pretty good, I figured, but I’ll save my verdict for the end of the book. 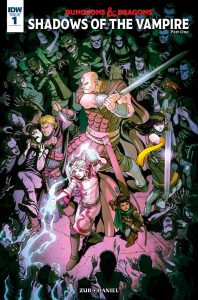 I loved it. I loved reading comics again. The bitterness and frustration of the past few years washed away with the discovery of new heroes, irredeemable evil, and a sense of adventure with momentum like a freight train. I was very excited when IDW announced a new Dungeons & Dragons series that would follow up with the characters of the Baldur’s Gate story. This new book would also be penned by Zub and feature vampire Count Strahd von Zarovich as the principle antagonist. Excellent.

With some temerity, I began to investigate other comics. I quickly shied away from the Marvel and DC superheroes when a glance at the shelves revealed the continuing presence of the same elements that had previously driven me away. I landed at Titan and picked up a new line of Doctor Who books. I drifted past DC and noticed they were going to try and reinvigorate the Hannah-Barbera properties. Archie Comics called to me with the presence of Mark Waid’s name on the cover of a re-imagining of the Riverdale gang and a trade paperback showcasing Mega Man squaring off against Sonic the Hedgehog. Once again, I could read and enjoy comic books.

But I had to finish reading my stock of Dungeons & Dragons books first. They were all pretty good. Alex Irvine and Peter Bergting took me to the world of Dark Sun and the quest of a slave for survival and freedom. Paul Crilley reminded me that comics told mystery stories as well, on the world of Eberron. John Rogers and Andrea DiVito introduced me to Fell’s Five in the Forgotten Realms, a party of adventurers drawn directly from my gaming table but who didn’t shy away from the consequences of their actions or the implications of their powers. And of course no one does the Forgotten Realms quite like R.A. Salvatore and Drizzt Do’Urden.

And then only Jim Zub and Legends of Baldur’s Gate remained. While Minsc and Boo tackled the forces of evil with tireless good cheer and inevitable purpose, the rest of the party rebelled against their parents, quested to save their family, or hung around simply because they had nowhere else to go. The stakes of the story rose to a firey crescendo that swelled and crashed in a wave of action and tide of ebbing emotion. The pacing kept me turning pages, torn between astonishment at each panel and a desperate need to see what happened next. The characters involved me in their personal motivations and desires without dragging me into a morass of juvenile emotional obsession or pedantic explanations of the obvious.

The party’s adventures continued in the next volume with Shadows of the Vampire. The corruption of the realm of Ravenloft touched the heroes, laying bare their weakness and beating them down against the power of Strahd and his ability to destroy hope. Through it all, Zub continually threw the actions of hero and villain into sharp contrast, filling the world with people who are selfish, desperate, and compassionate. The stories haven’t delved deep into the philosophical discussions of the fantasy realm. They haven’t explored the implications of a world populated by deific monsters and mortals who can challenge the gods. But they haven’t needed to; Zub’s stories possess humanity. These are the people we hope we would be if we found ourselves in their world.

I met Zub at the 2016 GenCon quite by chance. He was working a booth (for his publisher, I presume) and I saw the display of Skullkickers and D&D trades. I commented to my wife that it would be very cool if I could get a signed copy of Legend of Baldur’s Gate. From the other side of the display, I heard a voice pipe up, “I can do that.” We spoke for a bit; he was very gracious and patient with me (no small feat). He’s clearly a fellow comics and fantasy fan blessed enough to be living his dream job. He convinced me to give Skullkickers a try, and signed that book for me as well. 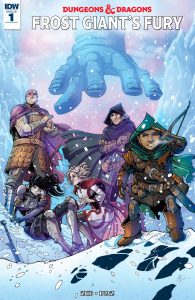 Zub continues to write for the industry, picking up more work for Marvel as the writer on Thunderbolts and Avengers, for UDON Entertainment’s Street Fighter license, and for Image in the pages of Wayward and Glitterbomb. The adventures of Minsc and Delina continue in the pages of Dungeons & Dragons: Frost Giant’s Fury from IDW. I’ve picked up his entire run of Pathfinder comics; Skullkickers is next on my short list. I give Jim Zub’s Dungeons & Dragons books a Quality score of “Excellent” and a Relevance score of “High”.

Winston Crutchfield has loved comics ever since he discovered his older brother’s stash of Spider-Man and What If? books forgotten in a dresser drawer. He blames his mother for teaching him to read and his grandmother for fooling nobody by “accidentally” picking up new comics at the drugstore with her crossword puzzles. He is the publisher and small business service provider at Critical Press Media, and may be found in the Christian Geek Central forums as “MindSpike”.