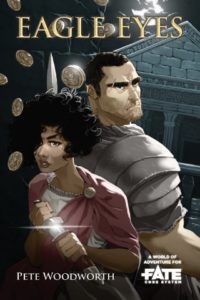 The concept of Roman Noir is not one that seems immediately natural to me, but this setting makes it quite convincing.

“Experience Roman noir firsthand in Eagle Eyes, the latest Fate World of Adventure from Pete Woodworth. Battle cynicism, corruption and murder in the shadow of the Coliseum. Play Eagles, the Senate’s private investigators, and use every means at your disposal to get at the truth behind everything from “ordinary” murders and robberies to high treason, noble intrigue, military coup attempts, and perhaps even the strange and terrible excesses of the Emperors.

Life is cheap and the dust of Rome soaks up a lot of blood, but the rewards for those that survive are beyond the dreams of lesser men.” (Publisher’s description.)

The book provides a decent overview of Roman life insofar as that information is useful to running a game and creating characters. The adventure builder is very nice for constructing a quick framework suited to impromptu noir tales, which typically take a good deal more effort. The flavored Fate Phase Trio provides excellent direction for the campaign as a whole and what the players want to get out of the game. Layout and readability is the high quality we’ve come to expect from Evil Hat.

This book attempts to center stories on the unraveling of conspiracies within the setting. Unfortunately, constructing a conspiracy or using it in a game as a current or impending issue is given no treatment; the conspiracy is simply described as stress track which the characters are attempting to take out in order to end the story – and few details are provided on just how that is accomplished. This book lacks either the focus of a directional campaign or the detail of a complete setting. Campaign advice may be summed up as “emulate this list of tv shows.”

There are a few example adventures built using the generator, but they are only story seeds. Not bad, but I would have liked to seen them fleshed out. The art direction is heavily shaded and lacks detail. I suppose its evocative, but it’s not to my taste. Overall, I don’t think this book added anything to mechanics of the Fate system as far as using them in a noir or Roman setting, but I think it was more useful for running a Roman Noir campaign than simply reading the Wikipedia entries on the subject.