Isaac Asimov’s Foundation series is most well known as the winner of the Hugo Award for “Best All-Time Series” in 1966, the only series to date to which the award has been given. Asimov himself assumed the award had been created to honor J.R.R. Tolkien and was surprised to receive it. The original short stories were published between 1942 and 1950 in the pages of Astounding Magazine. These were later collected, and additional material added to form the novels known as the Foundation Trilogy.

The impact of the Foundation stories has been felt in every form of series fiction written since its time, and most significantly in the fiction written for tabletop and electronic gaming. Until Foundation, attempts to build a cohesive mythology around an entirely fictional setting had been mostly accidental and abortive. It’s possible that Asimov’s work was taken more seriously than E.E. Smith’s Lensman series (with which it shares many similarities) due to Asimov’s emphasis on science and problem-solving rather than action, and his choice of humans as the protagonists instead of Smith’s Arisians. It also seems likely that Asimov’s writing was more approachable than Tolkien’s heavily literary style. 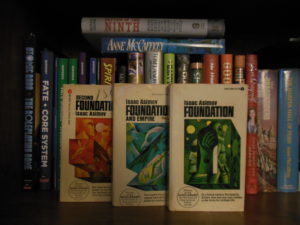 In Foundation, Asimov describes the formation and continuance of a great galactic civilization, as predicted by the discipline of psycho-history and safe-guarded by the twin Foundations. The stories are predicated on the continual development of humans along evolutionary and societal lines. The First Foundation is responsible for preserving the store of galactic knowledge and advancing civilization. The Second Foundation is responsible for locating persons with telepathic ability and ensuring their continued genetic advancement. This combination will eventually bring about a Golden Age of civilization.

Like many of his peers, Asimov was a devout humanist. He viewed religion as antithetical to reason, a harmful force impeding the moral and civilized progress of humanity. Asimov argued that a society based on reason would ultimately work for the betterment of all, that those who acted in accordance with rational thought would choose actions that served others rather than themselves. Asimov also argued that the majority of people chose to act according to their base desires rather than rationally.

Asimov’s viewpoint still reflects the dominant themes of modern science-fiction, that reason and religion are ultimately incompatible. It also holds that a majority of humanity is not rational, and therefore not moral. There is a logical fallacy in this thinking that equates rationality with morality, two separate modes of behavior. Ironically, Asimov acknowledges this fallacy, especially in the character of The Mule, and acknowledges without addressing the problem it poses to his arguments.

Asimov’s literary construction of the Galactic Empire has been continually emulated in the years since, and continues to form the pattern for series fiction that uses empire-style civilizations. Asimov’s characters are likeable and relatable, if not necessarily memorable or extraordinarily iconic. His heroes tend to be scientists and mathematicians, and they overcome difficulty based on their capacity for reason rather than physical prowess.

The Foundation Trilogy is one of the most influential works of science-fiction ever written. This article and others like it may be found on the blog at Christian Geek Central. I give Asimov’s Foundation Trilogy a Quality score of 9/10 and a Relevance of 10/10.