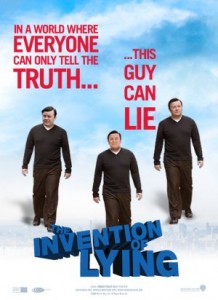 Weren’t expecting this, were you? Based on the trailer, my impression of the movie was that it was going to be a lighthearted romp about people who misunderstand each other and then find each other emotionally, surrounded by a materially improbable setting. I expected the very embodiment of two words I have come to dread.

Don’t wait for the part where I relent and say I was sadly mistaken. This is a chick flick. Snag a notepad and watch it anyway.

The materially improbable premise is that “people never evolved the need to lie.” The phrasing is important. Relationships between people are based on their potential for a positive genetic match in their children. Wedding vows consist of the words, “Do you promise to stay together as long as you want to and to protect your offspring?” A man on the street screams to nobody in particular, “Why are we wearing clothes and living on top of concrete? We’re just animals!”

In addition to lies, this world also lacks hyperbole, fiction, and religion. Marketing consists of a man on the tv asking people to drink Coke because it’s famous and you’re used to it. Entertainment consists solely of documentaries which are read verbatim from a script, there being no such thing as people who pretend to be other people (ie, actors). Religion is simply absent; medical professionals at a hospice are confident that after death is only oblivion.

The movie is mildly amusing. The humor is of the “scandalous” variety, where personal and intimate topics are discussed publicly and in detail without a trace of self-consciousness. Every conversation is one of full disclosure. The people in the movie have no sense of modesty or propriety, and accept both compliments and insults with the same equanimity. Businesses and products are labeled with stark honesty, such the “Place to Abandon Old and Unwanted Persons Hospice” or the “Convenient Place to Have Sex with a Near Stranger Motel.” My favorite is “Pepsi – For when you don’t have Coke.” It’s…. mildly amusing.

And then Mark (Ricky Gervais) learns how to lie.

Hijinks ensue for 15 minutes or so, after which Mark discovers that he can do something else that has been subtly lacking from the dialog. He can encourage people by telling them that life can and will get better, that they have a value not attached to their current economic or physical status. He tells a dying person that oblivion does not follow death, that instead we are reunited with our loved ones in a kind of paradise. It seems so natural from our position on the other side of the screen to offer encouragement and hope for eternity, but remember… as far as the movie is concerned, it’s a lie.

In a world of perfect honesty, where people do not treat each other with disguised rancor or concealed hostility, where humanity is merely a civilized animal that seeks to pass on its genetic material, people suddenly discover that compared to the hope of eternity, the present world is meaningless. The world looks to Mark for more answers. He gives them in the form of 10 codified statements regarding life, the afterlife, and how to treat each other. There is additional nonsense here, but among Mark’s claims is that there is a man in the sky who makes all things happen both good and bad. And then something else interesting happens.

Humanity rejects the man in the sky as cruel and heartless, ultimately accepting that there is nothing they can do about him anyway so he should just be ignored. Things eventually return to a semblance of normalcy, with the addition that people now know about the man in the sky.

More chick flick stuff happens. I… wasn’t really paying attention. I was thinking through the ramifications of the premises and what it says about our world. The film is a fascinating study on the nature of humanity and what it could mean to live in a world without God. I found it particularly honest that even though all religions are essentially treated as deliberate falsehoods, the movie acknowledges that hope for eternity is an essential part of both the human condition and the ability to be truly happy. There is quite a bit here to discuss, and the movie isn’t nearly as offensive as I thought it was going to be.

This review was originally written for the Christian Geek Central forums, so using their scoring system I give it a Relevancy score of 10 out of 10, and a Quality score of “Chick Flick”.