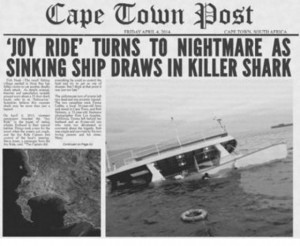 Shark Week and GenCON 2014 all in one sitting. We’ve got some things to say about the fakeumentories on the Discovery Channel. Last year it was Megalodon, and this year it’s Shark of Darkness: Wrath of Submarine! We share our excitement over GenCON, dish out a new life lesson from the Disney-Pixar film Finding Nemo, and serve up a B-Movie Double Feature review. This time around: Sharktopus and Tw0-Headed Shark Attack. Both films get positive “Buy It” reviews. Finally, Isaiah talks about the book he read, “Armor of God” by Phil Elmore. It’s a great story about a real-life superhero. See you in the reaction chamber!

Shark of Darkness: Wrath of Submarine