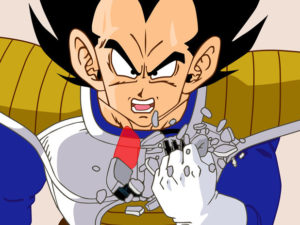 The Fate System measures health, willpower, composure, structural integrity and even the progress of a scene using the Stress Track mechanic. This measurement tool flexes to adjust to the current situation; it is not meant to emulate the absolute durability of an object, but the relative importance of the subject to the dramatic potential of the scene. The Stress Track interacts with every skill usage in exactly the same way, but the dramatic intention of the skill dictates the way in which results are applied. In Fate Core, the four actions used to affect the Stress Track are Overcome, Create Advantage, Attack, and Defend.

Before addressing the four actions and their usage, it is important to understand the way in which Fate qualifies results. Fate always favors the successful roll; we’ll call this rule “Fortune Favors the Bold” or FFB. To quickly review some terminology, every point by which an action succeeds is called a “shift”. After a Stress Track is full, the first shift is used to declare an action successful and every two shifts after that creates a Consequence. For example: in combat, Player One uses an Attack action and Player Two uses a Defend action.

Case 1: Player One beats Player Two by 2 points. Because P1 used an Attack action, those 2 points are applied directly to P2’s Health Stress Track. This is a familiar situation.

Case 2: Player Two beats Player One by 3 points. Most tactical simulators simply declare the attack a failure and move on. But Fate always favors the successful roll. P2 inflicts 3 points of Stress using the Defend action. The Defend action targets the Stress Track associated with P1’s Attack skill, inflicting 3 points of Stress. The first shift is used to declare the Defend action successful. Every two shifts after that creates a two-point Consequence. Fate Core refers to this Consequence as a “Boost”, a bonus that may only be used one time.

Aside from the terminology, there is no difference between this outcome and the outcome described in the “Actions and Outcomes” chapter of Fate Core (FC 140-143). So why get nitpicky? By applying the Stress Track terminology to everything, it allows us to treat every instance of a die roll in exactly the same way. We no longer need to artificially differentiate between Defend, Attack, Create Advantage and Overcame once we realize that all of these actions attempt to create Stress, differing only in target and intention.

A final definition is needed. We must now differentiate the Stress Track that can cause something to be Taken Out as separate from all other Stress Tracks. We will call this the Functional Stress Track. Depending on the nature of the scene, it may be Health, Composure, Willpower, Sanity, or anything else suitable to the action. All other Stress Tracks are referred to as Transient Stress Tracks, because they are viable targets for actions but will not yield a Taken Out result.

Once we acknowledge that due to FFB all actions create Stress, we can also acknowledge that actions differ only in target and intent. There is really only one action, Create Stress, which is governed by the use of Skills. Skills may then be defined by their targets and intentions, creating greater differentiation and a more clear delineation of usage that opens up a range of tactical choices for use as Consequences, Aspects, and Boosts.

Attack: target an individual’s or object’s Functional Stress Track for the purpose of Taking Out the target and inflicting a permanent or semi-permanent Consequence.

Defend: target the Transient Stress Track of an incoming Attack Skill for the purpose of preventing Stress and gaining a temporary Boost.

Overcome: target the Functional Stress Track of a permanent or semi-permanent Aspect in order to Take Out the Aspect and create a Boost. The classic example is of picking a lock. A door has the Aspect “Locked.” Until this Aspect is Taken Out, the door may not be bypassed. If the Aspect has a Stress Track of zero, a single roll may be sufficient. More boxes means the task could take longer; not a problem unless you’re being pursued by Cultists of Kali-Ma!

Remember that Fortune Favors the Bold! Even when a player is rolling against a static difficulty number, that static difficulty is considered to be taking the Defend action. If you fail in your attempt to Create an Advantage or Overcome an Aspect, the target succeeds in their Defend action possibly gaining a Boost. This can result in the lock becoming Jammed, the rapper Flipping the Script, or the duelist Catching You Off Balance.

The Stress Track represents so much more than simple Hit Points or Willpower ratings. This measurement of difficulty is the touchstone around which the entire Fate System scales. Correct application of the Stress Track creates more intense dramatic moments, opens up more tactical choices, and reins in power mad players by presenting a more complex challenge.

For more where this came from, help me produce Opposing Forces: a tactical manual and gallery of opponents for Fate Core, now funding on Kickstarter! 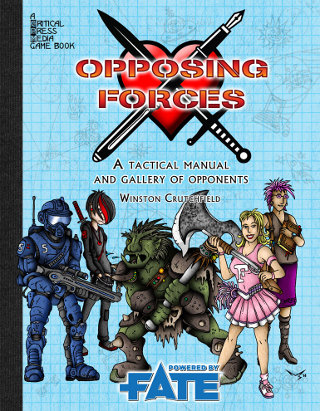