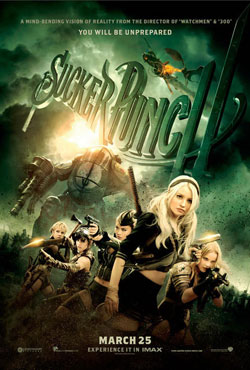 If you’ve found this review, chances are you’ve already read half a dozen others either deploring Zack Snyder’s film for its concept or praising it for its appearance.

All those reviewers are wrong.

“Sucker Punch” is a subtle, complex, and carefully executed exercise in storytelling and filmmaking. Snyder tells us the story of Baby-Doll, a young woman we meet immediately following the death of her mother, and stay with her during her tragic attempt to save both herself and her sister from their abusive step-father. In retaliation, the step-father commits her to an asylum where she is scheduled to be lobotomized. Baby-Doll retreats from reality into increasingly complex fantasies in her attempts to escape from the asylum and regain her freedom.

If “Sucker Punch” sounds depressing on the outset, it is. This movie deals with horrific themes of abuse and social disassociation, but does so through coy manipulation of the main character’s perception of reality. The imagery ranges from historical 1920’s to romanticized burlesque to fantasy-steampunk-scifi in a visual treat fluidly appealing to modern video gamers and fanboys. The heart of the film remains with its treatment of theme, and “Sucker Punch” is a film that deserves to be studied and appreciated for its attention to the finer points of filmmaking and storytelling.

The story behind “Sucker Punch” seems straightforward. Baby-Doll wishes to escape from the asylum, and retreats into self-delusion in order to do so. The goal is clearly defined, the stakes continue to elevate throughout the film, and all character arcs and plot elements are resolved in seemingly the only way possible.

The characters of “Sucker Punch” are complex creations with varying levels of competence and emotional stability. Although we mostly get to know them through a lens of fantasy one step removed from reality, Sweet-Pea, Rocket, Amber, and Blondie all bring sufficient depth and resonance to the screen to connect them with the viewer strongly enough that their success or failure really matters on an emotional level.

The technical construction of the film goes way beyond Snyder’s trademark super-saturated colors and seamlessly integrated CGI sets and action scenes. The story is told in three layers of perception, each one visually distinct from the others and blended seamlessly in smooth, subtle transitions. Snyder uses his mastery of color saturation to subtly distinguish the different fantasies, and a narrative device to contrast perception and reality. The FX, CGI, costuming, sets, and action scenes are all a treat to the eye, with barely a handful of slips in fluid motion.

The story at the heart of “Sucker Punch” is a horrific tale of emotional, physical, and sexual abuse. Were it not for Snyder’s manipulation of perception and changes of visualization, this would be a far more depressing version of “Girl, Interrupted” – one designed to make viewers eat a bullet. Instead, the opening exposition is delivered in silence, and with an absence of on-screen violence that makes the situation no less horrific. When Baby-Doll retreats into fantasy to deal with life at the asylum, she perceives the house as a burlesque show where women are objectified, used as slave labor, and sexually abused. These depictions place the women in fairly conservative, traditional stage outfits of the period. At no time is the implied level of sexual activity ever witnessed on screen; whenever Baby-Doll is called to “dance” in her fantasy (an act that translates to being raped back in reality), she retreats once again to another world where she and the other girls are in control, and empowered to enact violence against their oppressors. Snyder’s layered storytelling and superimposed fantasies make it possible to tell a graphic story of abuse, rape, and misconduct in a way that impacts emotionally without horrifying visually.

Not only is “Sucker Punch” a movie that I will want to see again, it is a movie that deserves to be studied for its complex story and precise manipulation of the film medium. Fan boys will enjoy the visual treat of the steampunk/fantasy battlefield scenes. Literature and film students will find much worth imitating in the execution of story and imagery. While unlikely to ever be considered a chick-flick, the story’s characters are all women who face adversity and grapple with it to an emotionally impactful climax.

“Sucker Punch” is not a movie for popcorn-flicksters, small children, artsy types, professional critics, or anyone else not willing to appreciate a movie with depth. This film will likely disappoint fanboys and gamers, who will desire more screen time devoted to the steampunk fantasy world. It will enrage nearsighted activists who write it off as another sexual-fantasy-power-trip victimizing women. It will bore action-seekers, and  horrify sensitive dramatic types. It is a strong start to a movie year that also promises X-Men: First Class, Thor, and Captain America.