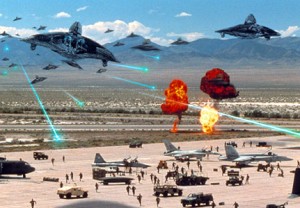 It’s a full-blown war of the worlds here in the reaction chamber. Curt and I get our prep on for the coming day when the aliens invade our shores. We know its coming. You know its coming. It’s up to us to convince all the poor saps who just won’t see the light that the visitors are not our friends! It’s a short prep, but we put some basic things in our prep kit and review a smattering of historical documents. The Martians are coming!

The trailers for Battleship give everything away, if anything can be said to be secret about a movie based on Hasbro’s popular board game. There are naval vessels. There are aliens. They fight. Without any related IP baggage of any kind, Battleship had the freedom to make a great naval warfare movie; I’m even willing to give them the aliens just because the sci-fi geek in me screams at the thought of World War II class 16 inch guns firing 2000 pound shells at E.T. I’ve seen Midway, Victory at Sea, and In Harm’s Way. I knew what to expect from a movie about naval warfare. I expected carnage. I expected explosions. I expected fleets of ships in classic naval maneuvers that pushed through deep water and came home bloody but unbroken. I hoped for David Weber’s Honor Harrington on the ocean. As it is, this film barely made it out of the harbor, let alone onto the roll of honored dead.

What do we really expect from a film named “Battleship”? Two enemy forces engage each other on – well, near – the open ocean. There’s a ridiculous subplot about establishing a communications array, and more than a bit of cringe-worthy cinematic physics, but this is a fantasy action film after all and I’m prepared to suspend the laws of physics if it serves the cause of drama. Since every event serves to advance the action and promote the naval engagement, the story gets a passing grade – but only just barely.

Taylor Kitsch carries the emotional weight of the film squarely on his shoulders, and he undergoes a solid journey from slacker to hero in the best short form character arc tradition. There is a token attempt to give a character arc to a disabled Army veteran, but it seems tacked on at best. The rest of the movie is populated a recognizable cast of characters, you know the ones: the pop star, the humorous guy, the nascent best friend, the authority figure, the love interest. All of these people are simply vehicles upon which Taylor Kitsch’s character carries the audience to the credits. For all the pressure of having the only developed character in the film, Kitsch fills the role with empathy and aplomb.

I’m so tired of second-unit film students being given a multimillion dollar budget and a hand held video camera. Whatever happened to the art of cinematography? This movie should have been filled with sweeping shots of entire carrier fleets engaged in mutually assured destruction. Instead, we get a camera shoved up the actors’ noses and being bounced all around the place. The result is almost unwatchable. All of that luscious tech design and expensive CGI is wasted because I couldn’t figure out what I was seeing on the screen.

There is a passing reference to the Art of War that makes no sense at all and depends on a highly personal interpretation of the laws of physics in order to work at all. No attempt is made to touch on themes of steadfastness and sacrifice. The writer makes no effort to familiarize himself with the mindset of the military man in general or the naval officer in particular. I didn’t expect Shakespeare on the ocean, but I hoped for something resembling the values and ideals of the military. Instead, we get a pathetically obvious condemnation of early exploration of the Americas by them-thar evil Conquistadors and that dastardly Columbus fella.

I saw it on the silver screen. I wish I had waited for the small screen. I can’t image any reason to watch this movie again. The story and characters only barely scraped a passing grade. There is no action eye-candy to keep me entertained. The schizophrenic soundtrack is simultaneously in love with AC/DC and The Blue Danube.

I’m just not sure what to say in closing. This isn’t really a movie that stays with you after the credits roll. Speaking of which, there is a completely predictable tag after the credits which it won’t hurt anyone to skip. In fact, skip this film entirely and get the far more satisfying American Warships from The Asylum.