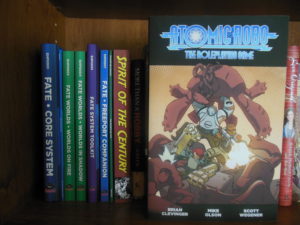 Atomic Robo premiered in 2007 as a six-issue mini-series, quickly gaining a cult following and branching out into the two ongoing titles “Atomic Robo” and “Atomic Robo: Real Science Adventures”. The story chronicles the adventures of Atomic Robo, a self-aware mechanical man created by Nikola Tesla. Each story arc focuses on a different era in the life of Robo, beginning in the 1920s and continuing to the near future. The stories imitate the pulp action novels of the 30s and 40s, with a healthy mix of Tom Swift in the recipe. Robo’s foundation, Tesladyne, employs “Action Scientists”, which pretty much sums up the book’s approach to storytelling. Recurring antagonists include Dr. Dinosaur (an intelligent deinonychus) and the ghost (phasically fluxed corporeal entity) of Thomas Edison. The creators premiered a free webcomic release for the entire series in January 2015 as a promotion for the tenth volume of the series, “Atomic Robo and the Ring of Fire.” The creators are currently running a Patreon campaign to continue support of the Atomic Robo comic.

Evil Hat Productions produced the stand-alone role-playing game in 2014 with the involvement of Atomic Robo creators Brian Clevinger and Scot Wegener. The system is based on their Fate Core product, but includes the full rule set in the Atomic Robo book. No additional books are needed. 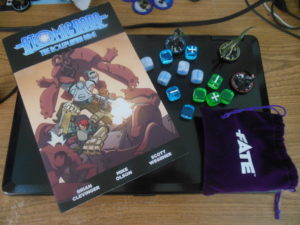 High Concept: Atomic Robo and the Fate System should never be separated. The book series emphasizes fast action with improbable stunts, starkly astounding science, and zippy banter that proves inevitably ironic. The role-playing game uses Fate’s variable attributes and flexible stress track to force game structure to imitate art. Characters tag their aspects and spend fate points to influence the story and make themselves more successful. When it’s time to break out the action science techno-babble, the elaborate challenge system for Brainstorms enables players to break out the dice and gabble away with a reasonable chance of inducing a variable phase flux field in the transphasic modulator simply by reversing the polarity of the power coupling and aligning the rheostat 90 degrees to reality. And if that doesn’t work, a good, solid punch usually does the trick. This is the kind of thing at which Fate excels.

Trouble: As with all Fate games, Atomic Robo requires massive amounts of buy-in and creativity on the part of the players. On the spectrum of role-playing games, Pathfinder would be on one end as a technically detailed tactical tabletop simulator and Fate occupies the other end as an exercise in group storytelling. There is a limited amount of tactical gaming in the system, enough to satisfactorily handle a fight between Tesladyne action scientists and the men in black of Majestic 12. Atomic Robo as a game theme lends itself as much to wacky ideas and radical puzzle solving as it does to rock-em-sock-em … fight scenes. Fate is really a pretty good match for the setting.

Phase Trio: The production value of the book is phenomenal. It’s printed on high-quality, thick stock, glossy paper in full color with a satin matte cover finish that’s so smooth to the touch. It contains the entire rule set for the Fate System, so no extra investments are needed. Every section is fully illustrated using panels from the Atomic Robo comic with the characters appearing in bubbles as if they’re playing the game and voicing over the panels. It’s priced at $35, weighs in at 300+ pages, and is the same shelf dimensions as the graphic novels so that it looks really nice next to them on your bookcase. The PDF loads quickly without any heavy background graphics and sells for only $10 on DriveThruRPG. Plus, Evil Hat is a member of the Bits & Mortar movement, so if you buy the book from your friendly local gaming store the publisher will send you the PDF version for free. My one real complaint with the production value is that a book this size really should have been a hardcover volume.

Success With Style: If you’re a fan of Atomic Robo or pulp science adventure in general, this is a fantastic treatment of the genre. The book lends itself well to adventures in the style of Gil Gerard’s Buck Rogers, Tom Swift, or Doctor Who. If you have any kind of interest in this genre or in the Fate System at all, this book is a superior treatment of the system over the Fate Core book, though you may still benefit from the Fate Toolkit. Action role-players to arms! 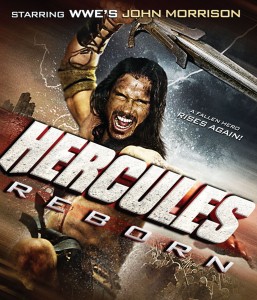 Well, not quite. But we do have a B-movie double feature for you. One of them is Hercules, and the other is in space! Curt and I fire up the reaction chamber for two new released from the Asylum. Age of Tomorrow blends elements of Armageddon, Ender’s Game, and Independence Day. Hercules Reborn seeks to merge Conan, Gladiator, and Robin Hood. Both of them are solid movies that we enjoyed well enough. The final rating for both of them is “Borrow.” We close up with a quick review of a trip to the comic book store where we stumbled upon hidden treasures in the form of Ogre Pocket Edition and Atomic Robo the RPG! Woot! Both of them deserve an episode of their own, and we’ll get to that!

Lastly prior to firstly…. Sharknado the Riffing is coming to Evansville! We missed the live riffing of the movie on July 10, and we’re gunning for the rerun on Tuesday July 15! Check your local listings or follow the link to the good folks at Riff Trax!