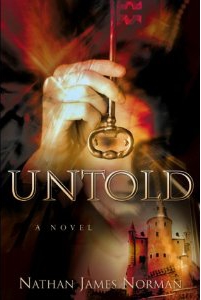 I’m in the Reaction Chamber with author Nathan James Norman, author of the sci-fi/fantasy novel “Untold” and contributor to “The Least of These”. Norman speaks with me about his novel, the associated full-cast audio drama through Paeter Frandsen’s Spirit Blade Underground Alliance, and a bit about who he is and where he comes from. We get into the power of story to educate and change lives. We approach literature, fantasy, and sci-fi from a Christian perspective, and touch on themes of salvation and orthodoxy, the promise of trouble in this world, and the nature of God. Plus a glimpse at the internal mythology of the Untold universe. read more

Direct from the Roney Zone and into the Reaction Chamber, Jeff Roney stops by to share some insights into his version of a classic biblical love story.  The story of Hosea and Gomer is not well known, but Roney and his cast of voice actors breathe dramatic life into this touching tale.

Big things in the wind for the show and the web site.  Not just here, either.  Get a great deal on Spirit Blade while you can over at The Spirit Blade Underground.  In celebration of the season and the coming changes, I’m giving away comic book grab bags to all those who write and ask.  Just email your name and address for a Christmas gift from me to you.  I said on the show it was going to the end of the year, but I’ve got a set number of these marked out, so the offer is good while supplies last.  Gifting practices are the topic today, along with randomness from my wife, Petra.  So grab a cup of cocoa and have fun with us! read more