If Gotham’s mythology weights it down from sheer volume, then Sleepy Hollow is hopelessly submerged in the deluge of a mythos not its own. Every single bit of this series inspired by based on using the names from Washington Irving’s eponymous ghost story borrows in the loosest since from vaguely supernatural-sounding events, history, and publications from throughout time.

The first season pulled names and references haphazardly from the Bible to populate a wholly original end-times scenario, sprinkled with a dash of Colonial American and European lore. I am generally in favor of wholly original mythology, and I think that CW’s Supernatural has done an excellent job of presenting new mythological construction. Sleepy Hollow has other problems.

The show lacks focus. There is a vague impression of the end of days. The Bad Guys have a Plan, but it’s apparently too complicated to enact on screen and clarify for the audience at the same time. But that’s okay; the show makes up for it’s lack of goal with a liberal sprinkling of every supernatural-sounding whatsit it can squeeze into the allotted time. Mix with a generous helping of interpersonal drama and a purposefully slanderous agenda aimed at the founding fathers. The whole experience is gonzo weird and so utterly directionless that I keep coming back just to see what they’re going to do next.

I want to take a look at the sources of this mythological mashup. Washington Irving: Ichabod Crane and the headless horseman, Rip van Winkle. The Bible: the horseman of the Apocalypse, the two witnesses, Moloch, demons. Purgatory and the golem ultimately comes from Judaism. European folklore provides a source for sin-eating and witchcraft. As near as I can tell, the “Native American” dream spirit Ro’kenhronteys also comes from Europe, specifically Hans Christian Anderson. This last episode started drawing from Lovecraft with a direct quote from “The Call of Cthulhu” as part of a magic ritual, and Shelley’s “Frankenstein” with the creation of a monster to fight to horsemen. I could learn to love this show, except…. 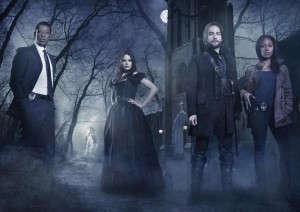 The characters wield the club of Political Correctness with blind abandon, striking out left and right against anything that resembles a modern hot-button topic and splashing mud with the delight of a child stomping in a particularly tempting puddle. Just when I start to enjoy the story of the week, they drop the Club on something that in my white male middle class meat-eating University-educated Protestant ignorance I had previously considered Something Good or at least harmless. I could make a list, but what’s the point? I just groan and blow it off as another symptom of Hollywood.

The characters are mired in their archetypes, unable to flex past the bounds of strictly defined gags and responses. Normally this type of thing doesn’t bother me much, but these guys have a single note they play over and over. Abbie Mills is in over her head with a persecution complex. Ichabod Crane cannot cope with modern technology (or clothing) and deplores the state of modern America. Jenny Mills is the Combat Chick. Henry Parrish (John Noble…. I miss Fringe) is eeeevillll. Of the recurring characters, only Andy Brooks (John Cho) and Frank Irving (Orlando Bloom) bring anything interesting to the table in terms of motivation or response. I generally promote archetypes as the basis for strong plotting, but these guys are just flat. It’s tiresome. But I get a gonzo weird monster of the week (mostly) and that helps me get past the clunky characters.

But the revisionist history has me weeping in my beer. And let’s not forget that “beer is proof that God loves us and wants us to be happy,” said Benjamin Franklin. Or so we thought. No, it turns out that all of the good, clever, and noble things accomplished by the Founding Fathers were actually done by their wives, mistresses, and slaves when they weren’t done by Crane himself. Crane takes every opportunity to paint Jefferson as a womanizer and plagiarist, Franklin as a lunatic and pervert, and all the rest as liars, thieves, and conspirators. If it were only once or twice I could blow it off, but this agenda makes for scandalous dialog to which real history need not apply.

This is a set of people for whom I have real respect and whose lives I have studied in depth. To see them treated this way using baseless lies solely for the sake of entertainment offends me on a level I don’t quite understand. Maybe I’m taking to heart the words of Jefferson himself (provided it wasn’t actually Ichabod Crane or Jefferson’s valet who said it… “It is always better to have no ideas than false ones; to believe nothing, than to believe what is wrong.” The modern viewer seems ready and willing to believe the worst of people, and perfectly happy to substitute entertainment for education. This bothers me a great deal. I’d abandon the show entirely if I thought it was a purposeful agenda rather than lazy and sloppy writing.

Still, as long as I get a gonzo weird monster of the week I’m likely to keep tuning in.

Curt and I take a look at three shows we’re really excited about for the fall season: Arrow, Sleepy Hollow, and Agents of SHIELD. I do a bit of complaining about the fact that Sleepy Hollow is almost – but not quite – inspired by multiple real-world mythologies. We lament the fact that The CW has to fill every single show with twenty-something angst and enough interpersonal drama to give “Passions” a run for its money. We take a quick look at the character dynamics at work in Agents of SHIELD and how it has the potential to go very *right* for once on television. And through it all we share our hopes and fears for the upcoming viewing season. No fear, I suspect we’ll revisit this topic with regularity.