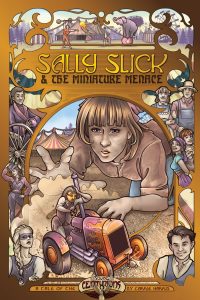 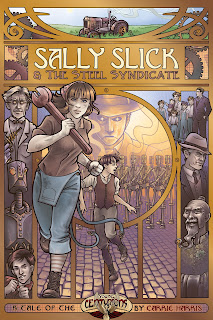 Visit a world of pulp action-adventure in the 1910s with the Young Centurions RPG from Evil Hat Productions. If you’re new to Fate or to the Spirit of the Century setting, this book belongs on your shelf. If you’re already familiar with either of those, take a minute to see if this book is going to add value to your collection before you jump on it. In Young Centurions, you take on the role of a unique individual, born in the first minute of the first hour of the first day of the new century. You embody a Spirit of the age, an aspect of the new century that shapes your character with the positive energy of things to come. Shadows oppose you, those people born on the last minute of the last hour of the last day of the previous century, empowered by the energetic detritus of what has gone before. It’s not always easy to separate Spirit from Shadow in the confusion of the new century, even when it seems you’re all working toward the same goals. And oh yes, you’re all teenagers. Young Centurions is the prelude to Evil Hat’s Spirit of the Century and Strange Tales of the Century, books that focus on adult characters of the 30s and 40s. Those books use the original Fate or Fate Core rules while Young Centurions uses the Fate Accelerated rules. Characters in Young Centurions tend to be less powerful, less capable, and more vulnerable than adult Centurions, both because the rules of the game provide fewer powers and because, well, you’re all teenagers. 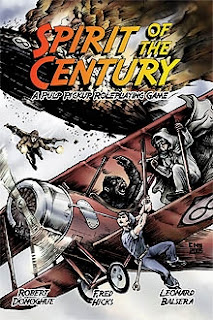 That emphasis on the characters as teenagers dealing with unique teenage problems is one of the strongest aspects of the game. (Fate pun…) We’re not talking teen angst here; the responsibilities of teenagers involve personal and family matters far more often than issues of society. Adult heroes make decisions that impact the world at large in ways that shape the events of society as a whole. Teen heroes make decisions that change their family dynamic and potentially jeopardize and hurt the people that matter most in their life. The book does a lot of things right. It provides a set of character archetypes to use as a foundation, with aspect questions and stunt packages that quickly get players into the meat of the game. It explains the use of approaches with clarity and through the use of examples. It teases the flavor of the world with story snippets and plot hooks as a springboard for your game. The GM chapter contains solid advice on gaming with teens as both players and characters, as well as tips on how to use the unique elements of the Young Centurions setting. The setting chapter gives us an intriguing glimpse of the world and just what role we’re going to play. Most important, the book makes me want to be a part of this universe. Still, there are things that I wish Evil Hat would have done differently. I see no need to reprint the Fate Accelerated rules, not when they make the FAE book so readily and inexpensively available. Young Centurions does nothing to significantly change the rules; simply adding the setting-specific material would have been sufficient. 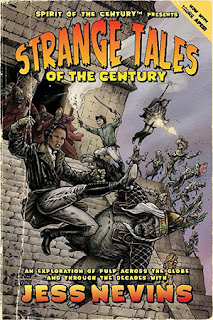 For all the intrigue generated by the setting teasers, the book leaves us completely cold when it comes to running the foundational elements of the background. The setting has no central conflict around which to build a campaign, though opposing agendas are implied between the Century Club and the Shadows. The book leaves the GM with a great deal of work to do in order to construct a group template, including deciding the specifics of the supporting structure and writing up stats for the opposition. I wanted more details on the Century Club, Doctor Methuselah, and the Steel Don. I want to draw inspiration from that material for my stories; I don’t want to have to create everything from scratch. I find only one critical fault with the book. Young Centurions games follow a story structure rather than a tactical structure, but the book provides no instruction on how to set up a game. This means you can’t simply stock a building with mooks and repeatedly kick down doors. You need to construct your game for narrative flow and problem solving. The Fate Core book includes a whole chapter on how to construct conflict scenes and tie them together. That instruction is absolutely essential to Young Centurions and its absence creates problems for GMs without a strong narrative background. So I’m conflicted. I want to like this book. The premise appeals to me a great deal. It’s a fairly solid introduction to the world of Spirit of the Century. It’s self-contained, since it reprints Fate Acceleratedand does a pretty good job with the rules. It captures the flavor of teen adventure and preserves a spirit of optimism. 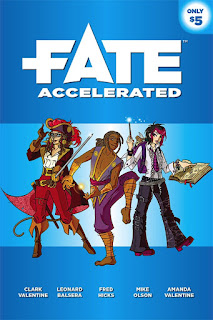 This is a setting for stories that I really want to read, but it’s also a game that I really don’t want to try to run. Story structure games put up a truckload of work for the GM and require a whole table of players that know how to effectively resolve conflict within a story structure. Spirit of the Century at least gives you the option to focus on the action scenes and talk through the rest without detracting from the game play. At the end of the book, I find myself wanting more. I really think there should have been more background material and a chapter on game construction. At only 160 pages, there’s ample room to push the page count up to 198 and create a truly complete product. The price point is good, only $20 for a full-color hardcover – half that for the PDF. It’s a great introduction to Fate and the to Spirit of the Century setting. By the same token, if you’ve already got Spirit of the Century or Strange Tales of the Century this book adds very little to either rules or setting. Even if you’ve already got the Fate rules in one form or another, this book adds some nice new mechanics and just barely enough flavor to make Young Centurions worth the purchase. My copy came from the original Fate Core Kickstarter, though when Evil Hat’s Magic 8-Ball selected me as a Young Centurions reviewer they also provided a digital copy. They have also requested reviews of the two Young Centurions novels: Sally Slick and the Steel Syndicate, and Sally Slick and the Miniature Menace. I read Steel Syndicate back when it was first released and loved it; I’m looking forward to reading it again on my way to the Miniature Menace ARC. See you then! *** Winston Crutchfield reads far more than is healthy, but is attempting to compensate by foisting his favorite books onto his rebellious teenagers. He’s always open to discussion about books and looking for reading suggestions. He can be found on the Christian Geek Central forums as “MindSpike” or on Goodreads under his own name.