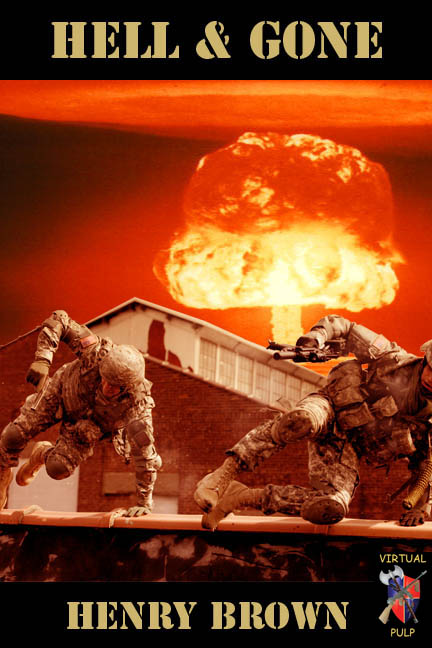 Henry “Hank” Brown came to my attention because we both participate in the action-adventure forums over at mackbolan.com. I bought his book simply because he came on the forums, mentioned the novel and asked people to buy it. Marketing at its most basic. When I eventually got around to reading it, I shot him an email half-way through the book and he was kind enough to do a podcast interview with me. Hank is a former soldier who’s put that experience to good use in his stories.

“Hell and Gone” tells the story of Rocco Cavarra and a group of retired special operators assembled by the CIA for a dirty op. Islamic terrorists have possession of an atomic weapon, and it’s up to Rocco’s Retreads to get it back at all costs and without implicating the U.S. Mission creep sets in fairly early, and before they can even fire a shot, these old soldiers are in it up to their necks. As a military thriller catering to the same crowd that reads Tom Clancy and Mack Bolan, “Hell and Gone” delivers hard core action grounded in the kind of realism that comes from experience. read more

When a small boy in Iowa forwards a mysterious email from ‘God’ to a small group of friends, he unwittingly releases a trigger that sends blood pouring throughout his farming community.  Thousands more are dead across the country in dozens of simultaneous terror attacks and the government blames fundamentalists who want to trigger the Apocalypse.  FBI Agent Joe Unes reluctantly teams with reclusive Internet radio host Barney Ison (from Sharon K. Gilbert’s The Armageddon Strain) to expose the plot — and discovers that the enemy is not of flesh and blood. read more