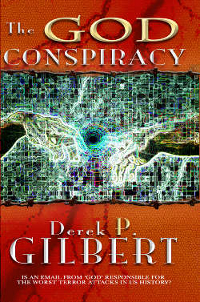 When a small boy in Iowa forwards a mysterious email from ‘God’ to a small group of friends, he unwittingly releases a trigger that sends blood pouring throughout his farming community.  Thousands more are dead across the country in dozens of simultaneous terror attacks and the government blames fundamentalists who want to trigger the Apocalypse.  FBI Agent Joe Unes reluctantly teams with reclusive Internet radio host Barney Ison (from Sharon K. Gilbert’s The Armageddon Strain) to expose the plot — and discovers that the enemy is not of flesh and blood.

The time is near. The great and terrible day of the Lord has come. You are one of the Chosen. Tell no one.
-GOD

Yeah, I’m freaking out too.  Move over Joel Rosenberg, there’s a new quill in the inkwell; The God Conspiracy is Derek Gilbert’s second novel, and first modern day thriller.  Derek and his wife Sharon host P.I.D. Radio, a podcast bringing us news and analysis on demand where they examine political and social headlines and hidden stories from a Biblical perspective.  Gilbert’s knack for bouncing the radar off otherwise overlooked or intentionally concealed agendas really shines through as he cants the landscape we know to a new and terrifying angle that remains far too familiar for comfort.

In the tradition of novelists like Joel Rosenberg and Tom Clancy, Derek Gilbert casts us into an America on lockdown.  Without warning or pattern, ordinary God-fearing people across the nation suddenly erupt into uniform psychosis in a weekend of terror that sends the nation into Threat Level Red.  Abruptly, civil rights become a thing of the past as citizens are seized and silenced with neither probable cause nor due process.  The Shadow Government begins its power play against the most dangerous and diabolical threat our nation has yet faced – conservative, right-wing, middle-America.  Gilbert serves us a threat that hits close to home and a cast that echoes the people we know in a situation beyond their scope of understanding and utterly out of their control.  From the small-town shopkeeper, to the stubborn FBI agent, to the former NFL star, to the Four Nerdsmen of the Apocalypse, the characters of The God Conspiracy rely on their wits, their training, and ultimately their faith to pierce the veil of lies hiding the truth and see beyond the threat against their lives and families to the real supernatural menace hiding just beyond our perceptions.

Gilbert gives us detailed characters and breakneck pacing wrapped up in a tangled plot and dripping with paranoia.  Despite the wealth of characterization, The God Conspiracy is little more than a vehicle for jumpstarting the reader’s own determination to find out the truth about the world in which he lives.  Drawing heavily from the research and information that flows through his news and opinion blog – Weapon of Mass Distraction – Gilbert taps the shoulder of several dozen popular conspiracy theories and drags them screaming into the public arena.  Even as a regular listener to his podcast and irregular participant on the Peering Into Darkness forums, I bookmarked several pages for further research, deleted all the cookies from my internet history, checked my rearview for tails, and put a fresh coat of Brasso ™ on my tin-foil hat.  The reader who does not come away from this novel with more than a few questions about his nation’s direction and the spiritual forces behind the world order has missed the thrust of the novel entirely.

The God Conspiracy is available directly from Gilbert’s blog – Weapon of Mass Distraction – as both a downloadable PDF or as a traditional dead-tree edition.  Both editions are published in partnership with Lulu.com.  Also, readers may purchase a Kindle edtion through Critical Press Amazon for use with the Kindle and many compatible e-book readers, including the iPhone and iPod Touch.  The volume weighs in at a hefty 400 pages, which prices the perfect-bound edition at $24.95, but makes the PDF a steal at only $5.00.  The Kindle version is priced at $7.96, and the dynamic formatting capabilities of the format mean this one is the best value of the bunch.  Whatever your preferred format, the pages fly by with frightening speed.  The God Conspiracy is sure to have you looking over your shoulder and evaluating the durability of your own faith.

2 thoughts on “The God Conspiracy”