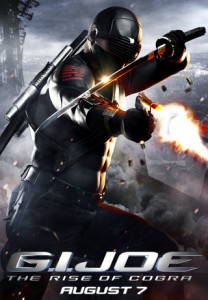 Background: The Hasbro property enjoyed the bulk of its popularity in the 80’s, beginning as a highly successful and still wildly collectible toy line.  The Marvel comic book series soon followed, mostly under the pen of Larry Hama; a half-hour tv series little more than an extended toy advertisement eventually produced an animated film that only fueled the Joe-mania sweeping the country at that time.  After that particular version of the franchise petered out in the early 90’s, Hasbro attempted to revive the property several times with varying degrees of success.

In 2001, Hasbro anticipated a wave of nostalgia and licensed Devil’s Due to produce a new line of comics that would build from the existing Marvel continuity.  Issue #1 hit the stands the week before 9/11.

Although military fiction did not experience quite the revival it might have otherwise expected, the Hasbro property has been in more or less continuous circulation since then.  Devil’s Due lost the license in 2008 and IDW picked it up.  IDW then launched a complete reboot of the property, ignoring the Marvel/Devil’s Due continuity and beginning from the ground up.

The Rise of Cobra isn’t their movie either.

The movie begins from an entirely … unique … premise, unrelated to the comics property of the past 25 years.  G.I. Joe is now an international task force comprised of the best soldiers from military forces around the world.  Their purpose is to combat threats no one else can.  The task force is above top secret; only the heads of the various nations appear to even know that G.I. Joe exists.

In spite of the veil of secrecy, Joe headquarters (“the Pit”) has been constructed underground in the middle of the desert.  It is a vast and heavily armed fortress, apparently self-sustaining ecology, and manufactures all of its own beyond-military-grade hardware, but is unable to detect outgoing homing signals and doesn’t feel the need to observe any level of military discipline or protocol.  The reasoning behind the secrecy, the source of the funding, and the instigating need for all this organization is never made apparent.

G.I. Joe is opposed by MARS Industries, run by James McCullen, who also knows about the G.I. Joe program.  He, of course, wants to rule the world, and has a needlessly complicated plan dependant upon poorly thought-out logistics, short-sighted and reactionary politics, and technology based upon an entirely separate set of physical laws than those familiar to modern scientists.  These are bad guys doing bad things in a bad way for the sake of being bad.  Their plans for world domination include much property destruction, but they aren’t really trying to kill anyone.

The movie suffers from schizophrenia of competence.  Characters are at the same time both the world’s elite and hopelessly oblivious.  Plot structure is also blindingly obvious, utterly failing to escalate consequences and threats either in the plot itself or character relationships.  Military discipline, physical laws, and critical reasoning all go out the window whole cloth; the point of failure comes from the inconsistency in which these elements are disregarded.  The end result surpasses reasonable suspension of disbelief and extends into the realm of the nonsensical.  Unfortunately, the film presents itself as a military action movie rather than a live-action cartoon, and the inability to apply either dynamic consistently throughout the film makes effective suspension of disbelief difficult at best.

The characters share names and in a few cases costuming design with the Hasbro figures and comics.  Flashbacks in the middle of the film attempt to flesh out the relationships between Snake-Eyes and Storm-Shadow, and between the Baronness and Duke.  Said attempts not only distract from the momentum of the film at key points, but fail to deliver their intended emotional punch.  Aside from occasional antics by Marlon Wayans (Ripcord), the film makes no attempts at characterization either through action or dialog.  The actors deliver no outstanding performances, nor do they detract from the film.

The movie is all about spectacle.  Characters assault an underground base and escape in a blaze of fire.  Warheads must be “weaponized” at a super-collider built in the middle of Paris.  Soldiers charge through the streets of Paris in armored exo-skeletons.  Armies of one-man submarines battle it out over a the vast panorama of an undersea base.  Things blow up.  Ray Parks shows off his martial arts skills.  Vehicles and weapons are just one step better and cooler than they have any right to be.

Plus, the camera is far enough back to show every last glorious bit of action, accompanied by a soundtrack that uses bass as a weapon itself.

For an action summer blockbuster whose central element is the military, the language in the film is suprisingly clean.  With the exception of a single instance, the dialog in the film is suitable for public access television.  The absence of swearing is so understated that when Duke actually drops an “s-bomb” it calls attention to the fact that no one else has been using that kind of language.

Another surprise in a military film comes from the level of violence.  Many things blow up.  Many guns are fired.  Lots of soldiers and civilians die.  But none of it happens on camera.  Of the deaths and injuries portrayed on-screen, none of them display any amount of gore, and even the bloody injuries are scarce and understated.  Two scenes may be considered extreme: one which portrays a horrible facial burn, and one in which a corpse dissolves to dust.   Even these do not match the level of graphic portrayal common to prime-time television.

In spite of an abortive attempt at fostering a love interest between several different characters, the film contains no sexual content more explicit than a kiss.  Dialog is mercifully brief when it is engaged in at all.  Complexity of plot and depth of character are not this film’s strong suit.

The spectacle of this film is so strong that it easily bears repeat viewing.  Children will ask to watch this film multiple times, especially boys.  The nostalgic G.I. Joe fan will not find anything in the movie to inspire a fond remembrance of good times past.  Casual viewers seeking frenetic action sequences will be inordinantly pleased.  As a party film, background ambiance, or drinking movie, The Rise of Cobra succeeds on all levels.  While it does not deserve a place on every viewer’s shelf, the intense-but-not-bloody action sequences and predominately clean dialog make this movie a better option than most in its genre, and a stand-out choice for family movie night.