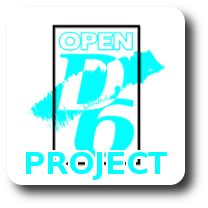 The D6 System was first published by West End Games in the 1986 Ghostbusters RPG. It saw use in several licensed titles by that publisher, most notably the Star Wars RPG from 1986 to 1998, when the company experienced financial trouble that cost them all of their licensed products. The company changed hands, eventually coming under the ownership of Eric Gibson in 2004 and releasing a series of “generic” core books not tied to a specific licensed property or game world. Gibson continued publishing the D6 System and other titles until 2009, when he officially released a number of existing D6 System “core” products under the terms of the Open Gaming License. In 2010, Gibson generously allowed not only the free and open development and distribution of the D6 System by the community, but the use of the OpenD6 trademark.

The OpenD6 core books released under the terms of the Open Gaming License are now available for free download. I hope you enjoy this great game as much as I have.

You can find the text of OpenD6 as system reference document at the OpenD6 Project. It’s a work in progress, so if you want to pitch in, register an account and get in touch!