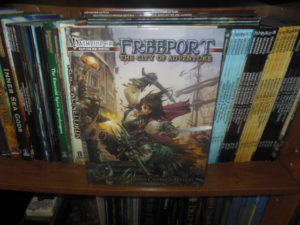 Freeport has been Green Ronin’s signature setting of pirate adventure and Cthulhoid madness since the early days of the d20 System boom. The setting launched with the ENnie award-winning adventure “Death in Freeport”, and has seen several other adventure modules as well as multiple setting expansions centered around the flagship title “Freeport: City of Adventure”. In 2006 the setting went “system agnostic” with the publication of the “Pirate’s Guide to Freeport” which contained no system stat blocks at all. This book was followed (slowly) by a series of “Freeport Companions” for different systems, all containing similar information tailored to different game systems. At this point, the line includes companion books for True 20, 3rd Era (d20 System), Savage Worlds, Pathfinder, and Fate. read more