Godzilla 2014 stomps its way into theaters and I’m there at the earliest showing I can possibly sneak out to see. The movie is pretty much everything I wanted from the King of Monsters. It’s moody, atmospheric, tense, overwhelming, and destructive on every level. This is very much the Godzilla film I have wanted all my life.

Curt and I take on the CW’s spring season closing. We have quite a lot to say about our hopes and fears for Arrow, The Flash, and Supernatural. Most of the rest of the lineup isn’t on our radar, but there are a few shows that are shaping up to be well worth the ride.

Finally, we look at the issue of disparity of scale in RPGs and discuss the way that different systems handle discrepancies between characters and things that truly outmass them. We look at number-heavy systems like Palladium and the d20 family, lighter fare like Savage Worlds and the D6 System, and a few random others such as DC Adventures and R. Talsorian’s Fuzion. Fate Core is the last one on the list, and we take on a few different ways to handle giant monsters and heavy equipment using variations of the core rules.

A podcast this week wouldn’t be complete without a shameless plug for Opposing Forces, the Kickstarter project funding a tactical manual and bestiary of foes for Fate Core. The first week is drawing to a close, and every person that joins the crowd gets me more excited! 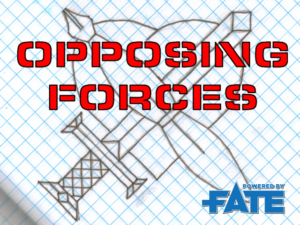