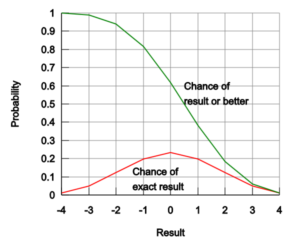 The 50% rule is seen most clearly in skill tests against a static difficulty. Pathfinder and the d20 games even have an option for players to automatically succeed at tasks within a certain difficulty range. This is known as Taking Ten or Taking Twenty because it assumes an average die roll. This type of mechanic evolved from the roots of the game as a tactical simulation, under the philosophy that success should be based on tactical choices rather than luck. When adapted for dramatic simulation, the die roll represents the effort of the characters in a very real way. read more